Beauty and The Beholder

These are among the most beautiful pieces of stone you will ever see. They belong to the golden era in Deccan history when Bidar was among the most beautiful cities in the world. Persian poet Abdul Rehman Jami who wrote the immortal epic `Laila –Majnoo’ had described Bidar as the `envy of Rome’. Historians have called it the capital of Deccan in the 15th century. 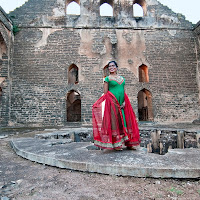 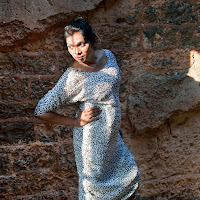 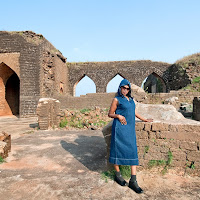 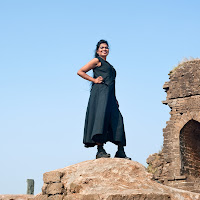 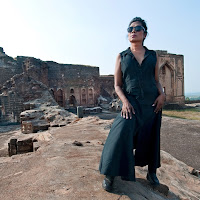 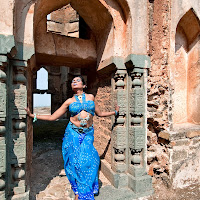 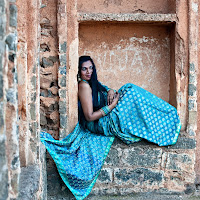 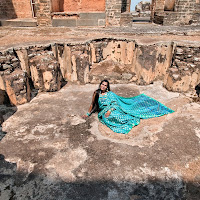 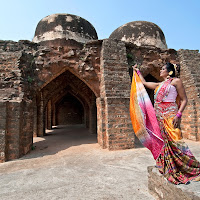 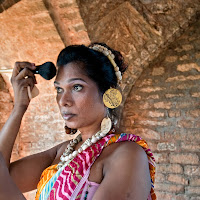 With a diameter of six miles, the fort in Bidar is among the biggest in the country. A trek through the monuments lifts up your heart. Rangeen Mahal has examples of grand architecture and unique art and craft pieces. Tarkash Mahal has modernistic designs of roof top rain water harvesting system. Solah Kambha Masjid has been an energy efficient Green Building for over five centuries.

Takht Mahal is the main venue of this shoot. Built by Sultan Ahmed Behman Shah, it houses an open courtyard where the King met his subjects. Seats have been carved in stone for the King’s advisors. The lofty octagonal building that served as the King’s private chamber has blue, white and yellow tiles pasted on the red lateritic stone. The tiger and the sun, the royal insignia is carved on the top. Moroccan poet Ibn Adhari sang ` this is a lofty building that is but a step at the threshold of sky’.

As I take you through this vast exposition of beauty, these thoughts rush through my mind.

I am a model and my job is to add to the beauty of my surroundings. What is common to me and the fort is the beauty, confidence and a grand indifference to the neglect by the world. What is not common is the fact that I move around and raise my voice, while the fort stays here and makes a statement by its silence. It has been doing so for a millennium now.

I am a transwoman and have been at the heart of the inclusion-exclusion debate for some decades now. For me, there are just two ways of looking at the world - liberal and conservative. While a liberal individual believes in equality, the conservative believe in exclusion. That is why tend to divided the world into US and THEM. Neglect, hatred and denial of rights are sure to follow.

Discrimination is not just about race, caste, class, creed or language. It is very much about gender. This has been hard -died into our tradition. Transgenders are evacuated, abandoned, trivialized and constantly rejected.

Bidar has been the victim of neglect too. Bidar was the biggest kingdom in India in the 15th century. It was celebrated for its beauty, tolerance and multi-culturalism. It had a roaring economy and housed the biggest markets of Asia. But now, Bidar is among the poorest districts in the country. Bidar carries a stigma. It was made to feel unequal for no fault of its own. But then, this impression was mostly created by those who never had an opportunity to see, understand or experience it. Bidar did not deserve this. And the fort symbolizes all that is wrong with this historic city.

The state capital of Bangalore is yet to focus on it. `The fastest growing metropolis in Asia’, needs to nurture, and support this small town. The monuments should find place on the tourist circuit of India.

We too are stigmatized undeservedly. We are the target of abuse and disdain. And that is because Transgenders have never been fully understood.

However, a civil society needs change this. We need to reach the unreached. We need to stand close, observe, understand and suppress prejudice. We need to create awareness about the issue and sensitise people. We need to think of ways in which transgenders could be assimilated in the mainstream. About how they can be accepted and there is no feeling of us and them. Let us understand and empathize with the neglected.

Something similar can be said about Bidar and the fort. Here is where our worlds meet.

I am Olga and this is our story.

Thanks for stopping by.

Olga. B. Aaron is a transwoman and a social activist based in Chennai.